Alberta’s Land Use Change in Context: How does the rate of agricultural land conversion and fragmentation in Alberta compare to other jurisdictions? 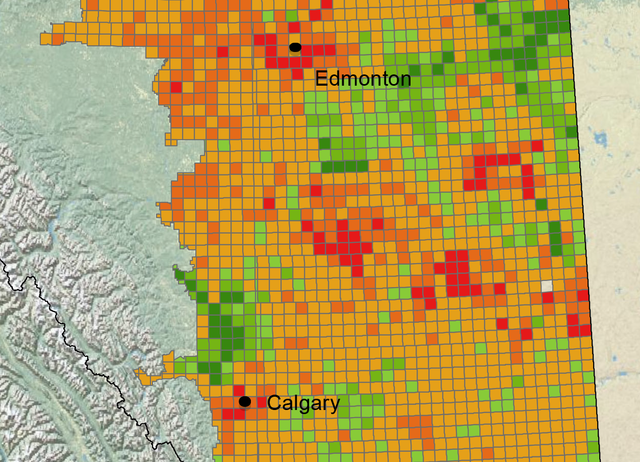 Excerpt of a map from the first year report for ALI's project 'Economic Evaluation of Farmland Conversion and Fragmentation in Alberta' (Haarsma et al., 2014, pg. 17))

The continued rapid growth of Alberta's resource sector and urban population has made an impact on the province’s landscape, but do we know by how much?

Statistics Canada has indicated that Alberta, and particularly the cities of Calgary and Edmonton, are seeing faster population growth than anywhere else in Canada. Is that expansion leading to fragmentation and conversion of the province’s farmland? Compared to other jurisdictions in similar situations, how does Alberta measure up?

At ALI, we’re examining this issue through our multi-year project, Economic Evaluation of Farmland Conversion and Fragmentation in Alberta. This project explores the conversion of farmland across the province, and particularly in the areas around, and the corridor between, Edmonton and Calgary. Many economic, social, and environmental consequences are under consideration, as well as issues like landscape conservation, local food production, and friction between urban and rural communities. The project’s first year report examines many of these matters, and more work will soon be available.

As part of their analysis, the project’s research team is determining how much agricultural land in the province is being converted and fragmented, giving us a measure by which to compare Alberta to other jurisdictions.

Working with detailed information on changes to agricultural land use in the United States from the Farmland Information Center (FIC) and the Natural Resource Inventory (NRI), ALI has compared the Alberta experience to states such as Utah, Texas, Idaho, and Montana –– states that are similar in size and agricultural landscape (FIC, 2010). The following tables provide an overview of the NRI data on the percentage of prime rural land converted to developed land in select U.S. states.

Annualizing Alberta’s rate of 0.82% and the lowest rate in a comparable U.S. state (Montana) at 2.35% provides a clearer comparison. This works out to be approximately 0.07% change per year in Alberta and a 0.09% change in Montana. It is important to note that the NRI data is within 25 years and the ALI study is within 12 years.

Based on these data, the rate of conversion and fragmentation of Alberta’s farmland appears to be similar to or less than comparable jurisdictions in the United States. Every jurisdiction is unique, and must continue to be treated as such, but it is useful to understand how our province compares to those in similar situations.

No matter what the scale, conversion and fragmentation has consequences. The researchers working on ALI’s Economic Evaluation of Farmland Conversion and Fragmentation in Alberta are continuing their investigations, and with future reports will highlight various aspects of change that should continue to receive the attention of policymakers and planners throughout the province.