In conversation with Michael Walters: Local food and agricultural land use 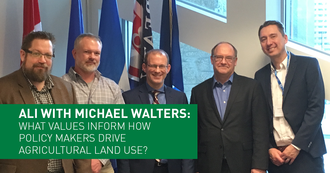 Albertans are increasingly aware of the importance of agricultural land in and around their urban areas. This land provides the food that Albertans enjoy at their grocery stores and local farmers markets. It connects Albertans to the province’s agricultural heritage and beautiful landscapes. And finally, it provides an incredible benefit to Alberta’s economy, both local and provincial.

Where these values come from and how they inform our policies on agricultural land forms the basis of a new research project launched by the Alberta Land Institute (ALI).

Recently, City of Edmonton’s Ward 10 councillor Michael Walters sat down with Dr. Bob Summers from the University of Alberta’s Urban and Regional Planning to discuss why Albertans are increasingly purchasing food from local sources and how these changing consumer values are informing how policy makers and elected officials make decisions about agricultural land use.

They reflected on the ‘Great Potato Giveaway’, an event organized in 2009 which allowed over 20,000 Albertans in the Edmonton region to experience the importance of farmland first hand. The event started when Gordon Visser of Norbest Farms, northeast of Edmonton, gave away over 45,000 kilograms of potatoes to make a point about how valuable agricultural land and the farming community are to Alberta.

Walters was with the Greater Edmonton Alliance at the time and helped organize the event.

“We had no idea about the response [the Great Potato Giveaway] would elicit,” Walters said. “We got a call from the police at 10:30 in the morning saying ‘what the heck are you guys doing?’ We said ‘we didn’t let you know because we didn’t think that many people would come.’ It was mayhem, beautiful mayhem.”

Walters said the giveaway had little to do with the appeal of free potatoes, given that they are  so cheap and accessible at the local grocery store, but something bigger.

“It was the experience of what was out there. The previous work we had done elevated the conversation about the mystery of that place and what does this place actually mean to the city.

“The kind of events in Edmonton that people love going to are festivals, small and large, based on culinary experiments with food elements. It has crept into almost every aspect of what we do in terms of land planning, event planning, economic planning - it’s a real big part of the city.”

In the fall, ALI published a new report on the economic impact of agricultural land fragmentation and conversion. The study, completed by the University of Alberta’s Dr. Scott Jeffrey and Dr. Brent Swallow, found that most of the agricultural land converted into developed uses between 2000 and 2012 was of the highest levels of land suitability for agricultural use. Edmonton in particular has high quality soils within its city limits - some of the best in the province.

Building from this in their research project, Swallow, Summers and University of Alberta graduate student Darren Epperson have gone across the province to speak with municipal leaders and to talk about agriculture and land use planning.

The immediate tension they have found is, while there exists a desire to protect agricultural land, communities feel the need to address growth pressures as well as manage the expectation that landowners should be able to choose whether or not they can sell their land for the purpose of development.

Walters said this is an important discussion as both landowners and policy planners begin to understand more about the cumulative impacts decisions made on private land can have with broader society.

“I think that’s the space we’re in for the big two regions in Alberta, for sure, is we have to have that debate and we have to start defining, which our Edmonton regional growth plan has asked us to do, where is it best to preserve prime agricultural land for the sake of having good land stewardship?

A survey conducted for Jeffrey and Swallow’s report shows residents in the Edmonton Metropolitan Region are concerned about the rapid expansion of urban areas and the consequential loss of natural and agricultural land in the area, with 80 per cent of the 320 survey respondents indicating they were willing to make a small one-time contribution toward farmland conservation in the Alberta Capital Region.

According to Summers, one of the other challenges municipalities face is that any decision they make to restrict development on designated land will simply push developers to neighbouring municipalities.

Walters said this reality is something municipalities that are part of the Edmonton Metropolitan Regional Board are trying to address.

“We have a single rule book, we police each other through the regional framework process where our local municipal plans don’t align with the metro plan we have the ability at the growth management board to ask for it,” Walters said. “[There] is a growing sense of memory about the value of land and its relationship to good food, and good food’s relationship to healthy people, and healthy people’s relationship to a thriving productive community.”