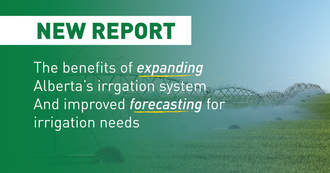 The report Systems modelling for sustainable land and water policy in Alberta's irrigation sector, was prepared by Dr. Evan Davies at the University of Alberta.

The new systems model to study sustainable land and water policy in Alberta’s irrigation sector, called CropSD, is one of the most detailed model of its kind for river basins in Canada. CropSD simulates crop biomass and yield for six crop types, calculates irrigation demand for each crop based on on-farm irrigation technologies, gross irrigation water demands based on the conveyance network, and reservoir releases to satisfy irrigation demands.

Dr. Davies said with irrigation in Alberta generating nearly $3.2 billion to the national GDP in 2011, these type of cutting-edge modelling systems are critical to policymakers' ability to manage Alberta's water for municipal and agricultural activities.

“With simulations running to 2040, our systems model serves as a decision-support tool at a high level of detail for municipalities, irrigation districts, government ministries and other groups," Davies said. "Specifically, for the City of Calgary, it generates medium to long-term end-used-based water demand projections, and can be used to inform infrastructure and conservation planning.

There remains still work to do to couple the various models together between municipal, agricultural and crop mix components.

The study also found that the expansion of current public investment from both the provincial government (75 per cent) and irrigation districts (25 per cent) would be highly beneficial for producers, with a net-profit value of $78 million or $1,324 per hectare at the baseline discount rate of 10 per cent.

If stable water markets are the policy objective, then a water sharing regime would be best regardless of the adequacy of the water supply. Such a flexible system will increase the welfare of licenced crop producers, livestock producers, the irrigation district and its members.

Based out of the University of Alberta, Alberta Land Institute exists to connect research and policy for better land management.

For further information or to arrange an interview, media are invited to contact: