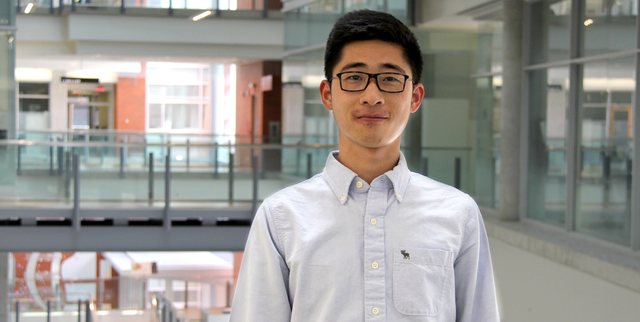 The Capital Region of Alberta includes Edmonton and its surrounding counties and municipalities –– an area in which conversion of land from agriculture to 'developed' is increasingly noticeable, because the population is growing at one of the highest rates in Canada. As people living in this area see a great deal of change occurring in a short period of time, what are their reactions, and how would they like to respond?

The investigation into these questions forms one of the four pillars of ALI’s three year project, Economic Evaluation of Farmland Conversion and Fragmentation In Alberta. Helping lead the research on this topic is Masters student Haoluan Wang.

Working closely with Principal Investigator Dr. Brent Swallow, Haoluan developed a survey for members of the public who live in the Capital Region. Creating this survey was an intricate process, as questions including technical terms like ‘agricultural land conversion’ could be interpreted in a variety of ways outside an academic context.

Relying on focus groups made up of stakeholders, government, academics, and members of the public, Haoluan was able to frame very specific questions that were accessible to a non-academic audience, then dispatch more than 800 surveys in two separate batches over the past eight months. The response rate was strong, and the information collected is proving very interesting.

Though Haoluan’s results will not be published until after he defends his Masters thesis (based upon the same work) this summer, the information he has gathered already promises to be very useful to policymakers. Thanks to the high response rate and the carefully-crafted questions, Haoluan can now identify how residents of the Capital Region feel about land conversion based upon the use of the land, and where it is located.

He can also report about policy responses favoured by residents of the Region –– which types of development and conservation practices are preferred for given types of land –– and he has been able to identify cases where opinions about conservation differ depending on where in the Capital Region survey respondents live.

Haoluan’s work even goes so far as to indicate how much money some residents feel should be dedicated to certain types of policy responses. This knowledge is allowing him to partner with fellow project researchers to do a benefit-cost analysis –– to see whether, at current market rates, people’s perception of the cost of conservation aligns with land values.

All of this information will be of use to officials in the Capital Region, and Haoluan and Dr. Swallow have already presented some preliminary findings to the Capital Region Board –– the organization representing the region’s 24 municipalities, tasked with preparing and implementing integrated plans for the area. More information from this study, and from other elements of the broader project, will be shared with the Board in the months ahead.

Over the past 18 months, Haoluan has presented his work at conferences in Chicago, Newport, and San Francisco –– as well at ALI's own conference, Land Use 2014. The trends he has identified will help guide future research investigating public reactions to land conversion across Alberta, and beyond.

Stay tuned to this site for more information as the Economic Evaluation of Farmland Conversion and Fragmentation In Alberta project shares Haoluan’s findings it future reports.