Benefits and Costs: Examining the Impact of Infrastructure Investment in Alberta's Irrigation Sector 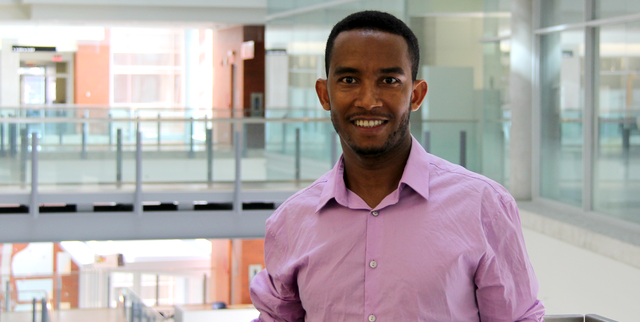 Irrigation has played an important role in the development of Alberta since railways first arrived in the province. In the early years of the twentieth century, diverting water from rivers to farmland was considered a necessity for survival. Today, the demand for irrigation is less existential than economic: though only 4% of the province’s agricultural land is irrigated, it is responsible nearly 20% of the province’s agri-food production.

Investments made in irrigation could prove significant to Alberta’s economy, but how do the potential costs and the benefits of such an investment compare? As part of ALI’s project Systems Modeling and Sustainable Land and Water Policy in Alberta’s Irrigation Sector, Masters student Dareskedar Amsalu is studying that question.

The infrastructure that carries water in Alberta’s irrigation system –– the ‘conveyance works’ –– has been the responsibility of several public and private interests over the past century. At present, thirteen irrigation districts are responsible for the operation of these canals and pipelines, while the cost of building and rehabilitating these systems is shared between the districts and the provincial government (25% is paid by the district, 75% by the province).

Recent decades have seen significant upgrades to roughly 60% of this irrigation infrastructure. Where possible, older open canals have been rehabilitated using new materials, including riprap armouring and often new canal lining material to reduce seepage. Smaller canals have also been replaced by enclosed PVC pipelines, reducing evaporation. These improvements to efficiency increase the amount of water that reaches farmland ––  by preventing seepage and evaporation, districts can serve more land with less. In the Western Irrigation District, for instance, the past 20 years have seen 20% more land irrigated, using 20% less water.

Considering the economic benefits of irrigation, would it make sense to upgrade more of Alberta’s irrigation infrastructure, and in turn, to irrigate more acres within the districts?

There are many dimensions to this question, and our research team will explore many aspects of this multifaceted, long-term issue using a systems model. However, working closely with Co-Investigators Dr. Jim Unterschultz and Dr. Scott Jeffrey, Dareskedar is doing a complementary investigation into the economic consequences. Having recently toured three of southern Alberta’s irrigation districts, he has gained first-hand knowledge about the ways in which rehabilitation of irrigation conveyance works enhance efficiency –– and the expenses that accompany those upgrades.

Considering secondary data and using both a cost-benefit and input-output analysis, Dareskedar is examining how many additional acres could be irrigated thanks to this efficiency, and estimating how much economic activity that land could produce for farmers, related industries, the government, and the Alberta economy as a whole. He will also study the potential costs of not investing in the infrastructure –– if no improvements are made, and if existing conveyance works lose efficiency, what consequences there might be for the economy?

Dareskedar's research will help establish context for the project's systems model (learn more about that model here and here), by improving the research team's understanding of the economic factors that might drive water management policy. It will also be of use to policymakers making significant decisions about investments in Alberta's irrigation sector.

In early October, Dareskedar will present some of his work at a poster competition at a Canada & US Societies for Ecological Economics conference in Vancouver. His broader findings about the benefits and costs of irrigation infrastructure will be available in subsequent months, as the Systems Modeling and Sustainable Land and Water Policy in Alberta’s Irrigation Sector project launches its systems model, and makes its final report.